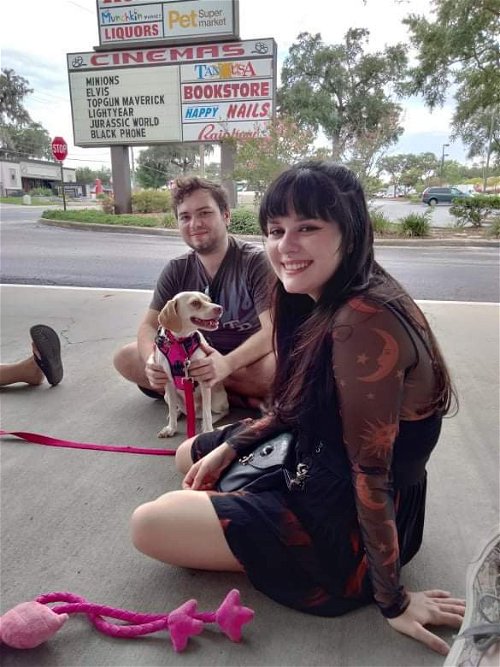 ***UPDATE***  Snow is currently in her first week of Board and Train with Procyon Training in Ocala, Florida because we are committed to helping this special little beagle mix! Procyon has graciously offered to support Snow's future Adoptive Family with a free online training session. Be looking for some videos and updates of this adorable little girl towards the end of June. She is doing really well with learning how to respond differently to her trigger situations and we are very confident that the right person to love and care for her for the rest of Snow's life is out there waiting!

SNOW is a SPECIAL NEEDS dog - she needs a special environment and continued training to help her with fear aggression. Please continue reading so we can explain beyond that intimidating label.

We rescued SNOW from Miami-Dade Animal Services where staff reported that, although she was very shy and fearful upon intake, she would readily take treats and took them gently. SNOW is now in a foster home with a number of other dogs. In fact, she has met about 40 dogs in the time she has been in her current foster home (since 10/26/21). She plays with many of them - including ones who are much larger than her. She is confident and friendly with other dogs and they like her.

People are where she has her challenges. Snow has actually gone on two sleepovers where she was affectionate and trusting with the potential adopters,  but they could not handle her reactions to visiters to their home or people they encountered on a leash walk. When she arrived at her current foster home she came to trust the foster mom first. She was curious about foster dad but if he suddenly came into a room she would react. It took 3 days to start to gain her trust and within a week she had become totally affectionate and adorable with both mom and dad.

Strangers pose the danger and strangers outside a car are very frightening to her. Here are some observations about the progress we have made with Snow in this area.

Snow is very food motivated and has done really well with training. Her response to SIT, DOWN and LOOK AT ME is strong and she is working on "off" and "wait". Using the ques she is strong with, her focus on other people can be redirected. So far she has been on 3 trips to a Tractor Supply and behaved well as long as her handler remained watchful and redirected before Snow reacted. She has also been to a small park where there were people passing her on a walking trail. There was also a children's playground with kids playing within sight.

We have also noted that when people come to our home, she is more curious than afraid and will often accept them very quickly. We still ask the people though not to reach for her and to be slow and gentle in their movements. Some of them she has even jumped up in their lap. However, she is not exposed to many people at our house.

Snow visited another person's home on a two occassions and the second time felt comfortable enough to jump in her lap to be petted.

We have attempted to counter condition her reactiveness in the car with an excercise we called "The Peanut Butter Brigade". This was an organized route of 5 volunteers who came out to the car which arrived in their driveway and inserted a spoon of peanut butter in a very slightly opened window. Her barking and lunging ceased as soon as she saw the spoon and as soon as it was consumed the person left. By the 4th person she only barked once and at the 5th person there was no barking. An excercise like this would of course need to be repeated again and again until she learns that people approaching the car is not a bad thing.

Snow is doing great with her housetraining (although she uses a dog door to a fenced yard) and does pretty well on leash too. SNOW is crated at night and sleeps quietly as long as she is not left alone and everyone goes to bed at the same time. She is a special little girl and we know she has a special home out there waiting for her!

Other Pictures of Snow (click to see larger version):