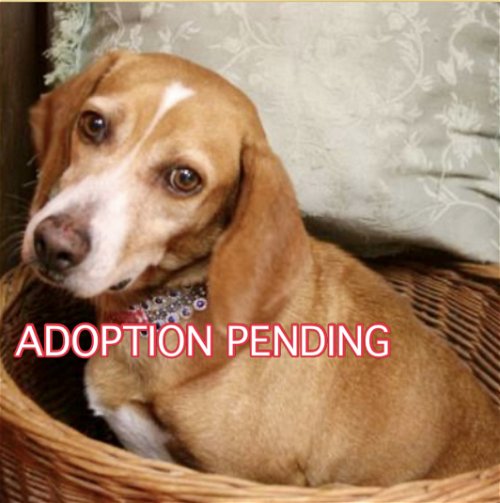 Won't you think about adopting me?

Tamera has an adoption pending.

Print an adoption flyer for Tamera!

Update 11/18/22 - Tamera's foster mom says she has really blossomed in the last week. She LOVES toys - but she does tend to take them outside and bury them. She does engage in play with other dogs but also seems to be fine entertaining herself and would be just fine as an only dog. She is still very sensitive when corrected – she cowers a lot when she's into something and knows not to be. She really wants to please. Tamera loves to be covered up with blankets at nap time and her foster mom things she would love to have a doggie wardrobe too - she's just that girly. She is making straight A's with housetraining and uses the doggie door just fine. Tamera is a little hesitant on leash but with a little coaxing she did just fine.

Update 11/11/22- The foster family has had Tamera for just 2 days. Initially Tamera was shy and unsure but has warmed up to the family now. She is quiet in the house. She was a little guarded with other dogs but after a few minutes she was fine with them. She is doing well with house training. She does well left in a crate. She was left alone outside the crate for an hour and did not get into any mischief. She will do best in a home that is calm and quiet and can be patient with her while she gets comfortable in her new home.


NEW ARRIVAL!!
Tamera is a little golden girl but she's not yet into her golden years. There's plenty of time before that! Her past life may not have been too cushy though and it appears she's previously had puppies - who knows how many litters? She is quite ready to move on and live a life where she is treasured and cared for. Tamera has just arrived so we will look forward to sharing more about her personality and temperament as she settles in to her foster home. So far she is doing well with the other dogs who are treating her with respect. We don't think Tamera would be good with cats though. Unfortunately she did test positive for heartworms but her treatment is scheduled at the end of November.

Other Pictures of Tamera (click to see larger version):