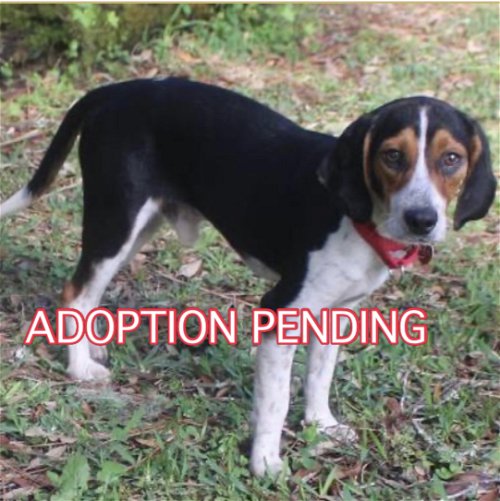 Bernard has an adoption pending.

Print an adoption flyer for Bernard!


11/20/22 UPDATE: Bernard has definitely warmed up to the humans in his household, but playing with other dogs is what makes his world go round. He is very puppyish and could be annoying to dogs who don't feel the same need to romp. He will also need supervision as he does tend to chew on things he shouldn't, but his attention is easily redirected. He now sleeps quietly in his crate at night but would most likely make some noise if left alone.

NEW ARRIVAL!
This little pint sized beagle boy came with his name - Bernard. He is so tiny but spunky and playful with other dogs - even dogs much larger than him. We were told by the shelter that Bernard was friendly but timid and he is definitely a good bit shy still of people. He's much more comfortable with humans if there are canine buddies around, but he also doesn't mind some gentle affection once you actually have him in your arms. Bernard walks pretty well on leash and is currently in a crate for meals and sleeping. He can be a bit vocal if left on his own and, little though he is, Bernard can make some beagle music! We are delighted to share that Bernard is negative for heartworms but he does still need to be neutered. We'd like to see if he grows a bit more confident in his foster home while we wait for his vet appointment, but Bernard should be ready for adoption towards the first of December.

Other Pictures of Bernard (click to see larger version):